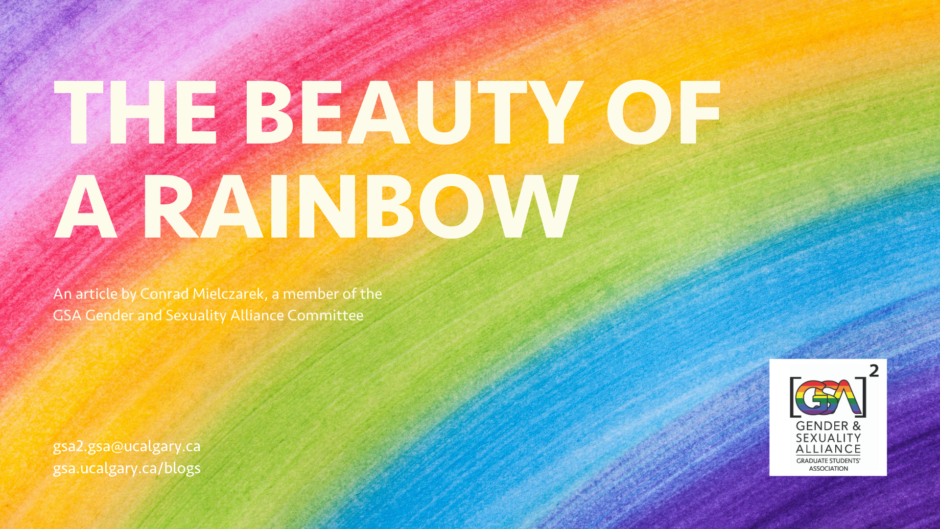 By Conrad Mielczarek, a member of the GSA Gender and Sexuality Alliance Committee

Disclaimer: A full discussion of these issues is not possible in a single, short essay. In this article, we provide an overview of some of the main ideas that can help you begin to have these types of conversations. We encourage you to keep researching and learning!

The pride flag. An everlasting symbol of great change and acceptance for love and freedom. As a cisgender heterosexual male, I always interpreted in a special way. I liked to imagine that every colour represented every aspect of humanity, a sort of flag to unite us as one common thinking species, no matter the colour, creed, gender or sexuality. More recently, I have decided to look into the history and intention of this flag and was pleasantly surprised by the richness and depth of the history, but more importantly the perspective at the time and how the world was truly a different place. Let us start with an overview of the state of the Gay Rights Movement and gay pride at the time of the flag’s inception.

As some of you may know, organized crime families engaged up to their necks in trafficking, racketeering, and prostitution were some of the least homophobic people around in the 1960’s. How could that be? Though homosexuality was decriminalized early in the decade, it was heavily shunned and laws were put in place to limit the autonomy of the homosexual community, as is commonplace in oppressive political systems trying to appear to be acquiescing to changing times. One of these restrictions was to openly serve alcohol to gay customers. I see what you’re getting at here! These unscrupulous illicit mafia-affiliated businessmen saw an opportunity to tap into a market of thirsty customers and owned most gay bars available at the time[1].

One of these bars was the Stonewall Inn in New York. Quickly becoming a safe haven for gay people, it wasn’t long before trouble found them. A police raid on June 28th, 1969 was the final straw for a people so ostracized by society. In response to the mounting harassment and dehumanization, along with this intimidation tactic, a riot broke out for several days with many bystanders coming to the aid of the gay participants. When the dust settled six days later, the face of the Gay Rights Movement changed. This event is believed to have influenced and started the pride movement as we know it[2][3][4]. I encourage everyone to read this source to learn more about the Stonewall Riots. For a more inclusive look at 2SLGBTQ+ history in the USA and Canada, read this article from our subcommittee.

Pride parades began erupting across North America, though they were more local and less united than their current counterparts. The strongest symbol at the time for gay people was an upside-down pink triangle. This morbid symbol was used by the Nazis in concentration camps to single out homosexuals and subject them to worse treatment than other groups. In an attempt to reclaim this symbol, it was willingly taken on by the majority of the gay community[5]. Though, it was soon understood that a more permanent symbol should be adopted to parade the bright highlights of gay identity, not sweep up the dark lowlights.

Let’s continue setting the scene. Hot off the heels of the counterculture movement and African American civil rights movement, the 1970’s marked a large change in societal norms and acceptability. A jaded young population took umbrage in the issues at the time, including segregation, worldwide shortages, fighting in the ill-fated and poorly motivated Vietnam War. Diversity was becoming a thought-provoking premise that began permeating modern society.

Speaking of the Vietnam War, did you know it had its own Oskar Schindler? John Riordan was an openly gay American Citibank manager in Saigon in the 1970s. In 1975, the North Vietnamese marched toward Saigon, marking the loss of the war to communist powers. He escaped the country via a chartered plane. Though Citibank ordered him not to return, he disobeyed. He knew that the remaining employees would be treated ruthlessly by the North Vietnamese for their association with Americans. Perhaps finding their circumstance not too different from his own, he personally flew back and escorted 105 South Vietnamese colleagues out of the city days before it fell. Our hats go off to you, Mr. Riordan. May we all aspire to have as much space as he does in his heart for our fellow humans[6][7].

The pride flag was created by a Vietnam veteran as well, beginning as an idea to unite and validate the Gay Rights Movement. The first openly gay Californian elected official was a man by the name of Harvey Milk. He was overseeing the San Francisco Gay Freedom Day Parade in 1978 and asked artist Gilbert Baker to create a symbol for gay pride. Gilbert, himself an openly gay man as well, agreed and settled on a flag, citing it as one of the most powerful and easily adopted symbols. Taking inspiration from actress and gay icon Judy Garland’s song “Over the Rainbow,” Baker and a group of volunteers hand crafted two rainbow flags from fabric clandestinely dyed using public washing machines. These flags were unveiled at the parade, instantly becoming a mainstay in the gay community[8][9].

The flag was designed to be as eye-catching and vivid as the expression of self should be, proclaimed from the highest mountains. Gay people, who were often told to hide and be silent about their identity were now handed a symbol that encouraged them to live without shame and fear. The original flag featured eight colours, each representative of an aspect of life as shown below[9]:

The original flag capturing the symbology of each colour. [5]

Unfortunately, manufacturing processes at the time rendered the pink and turquoise stripes expensive and difficult to create. The intention of the flag was to be a symbol, which required it to be accessible as well as ubiquitous. These two stripes were ultimately dropped, leading to the six colour flag we all know and see now[8][9].

That’s the one. The most awe inspiring part of this contemporary flag is that it is internationally recognized, uniting the 2SLGBTQ+ far beyond the original scope Baker intended. Though this flag is the most recognizable across the world, it is not the only. The many facets of 2SLGBTQ+ are represented through flags as diverse and unique as the people who make up the community.

It’s safe to say I learned a lot during my time researching this topic. Hopefully my original interpretation can hold true in the future, when the class, colour, gender and sexuality of an individual will have no bearing on their freedom, autonomy and how others perceive them. Until then, the rainbow remains, a bastion of hope and excitement for times to come, catching the eyes and hearts of those willing to listen and change, while solemnly flying in the wind for those who have, are and will suffer to express themselves in a world that is just waking up to its true potential.

February 11 and 12 | Taylor Institute and Online

Introducing the The GSA is excited to announce our keynote speaker for this year's Peer Beyond, Joshua Whitehead.

Joshua Whitehead (he/him) is a Two-Spirit, Oji-nêhiyaw member of Peguis First Nation (Treaty 1). He is currently an Assistant Professor at the University of Calgary where he is housed in the departments of English and International Indigenous Studies (Treaty 7). 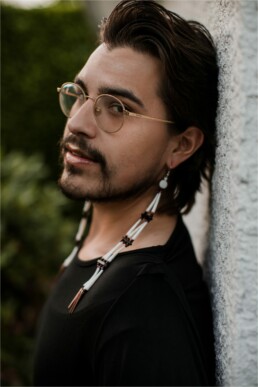