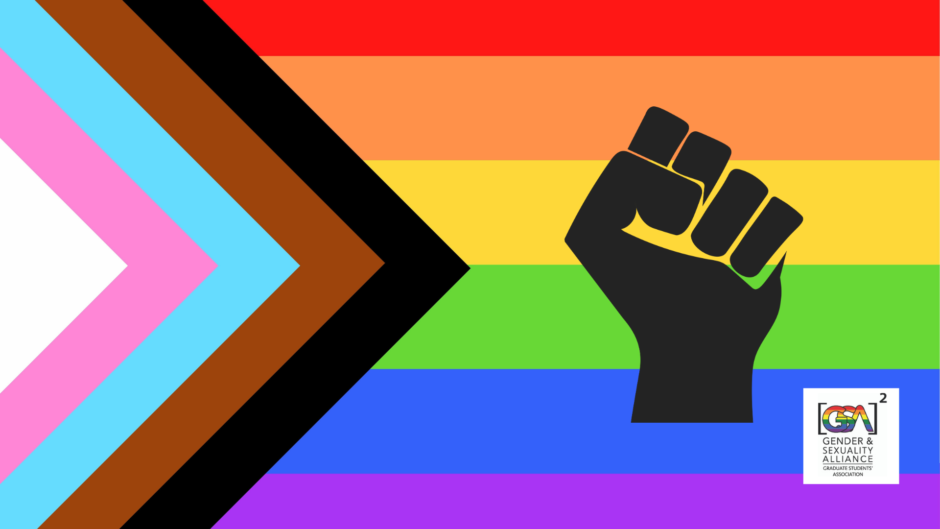 [December 4, 2020] The Gender and Sexuality Alliance of the Graduate Students’ Association would like to add our collective voice to the calls for accountability being made against Calgary Pride and Calgary Queer Arts Society.

Earlier in November, Suitaakii — a local two-spirit, Blackfoot artist and former employee of Calgary Queer Arts Society (CQAS) — shared her experiences of racial violence at the hands of two Calgary-based community organisations: CQAS and Calgary Pride. The list of claims is extensive and includes such things as instances of cultural appropriation, blatant disregard and disrespect for Indigenous cultural practices, exploitation of Indigenous trauma, nepotistic hiring practices, and underpaying BIMPOC (black, indigenous, mixed raced, people of colour) artists and employees in contrast to their White counterparts. We encourage you to visit @rezinbabe on Instagram to hear her words directly.

Recently, another QTBIPOC (queer, trans, black, indigenous, people of colour) community member and former employee of Calgary Pride shared their own experiences of racial violence with the organisation. They assert that Calgary Pride weaponised their positionality as a member of the QTBIPOC community, as a means to allay suspicion of their continued racist behaviours. Further, the community member claims that Calgary Pride undercompensated BIPOC organisations for their potential collaboration efforts, while its Executive Director acted inappropriately and predatorially towards racialised artists. We encourage you to visit @sameen_a on Instagram to hear her words directly.

Responses from CQAS and Calgary Pride have only served to reproduce the violence and harms that these members of our community are reporting.

Instead of addressing the calls for action specifically and publicly raised by these two QTBIPOC kin (and privately by countless others), Calgary Pride has stated that they “stand by” those who committed these egregious forms of racial violence and even go as far as saying that the available evidence does not support the “accusations.” They suggest that to hold themselves accountable, a member of the executive team will be placed on paid leave until a third-party organisation completes an “assessment.” No discussion of the substantive evidence provided by the community members was made, no information regarding the third-party organisation has been disclosed, nor have any details regarding the “assessment” been released. Further, there has been no discussion of community inclusion in this assessment beyond requesting “feedback.” It is clear to all of us at the Gender and Sexuality Alliance that this is an act of silencing and dismissal.

CQAS has declared that they will be establishing an “Anti-Racism Committee, which will be a community directed initiative with the explicit mandate of engaging QTBIPOC community members.” CQAS also notes that they are “adding five seats” to their board specifically for QTBIPOC, “hiring a QTBIPOC individual for the currently open Director of Programs position,” and undergoing “anti-racism training for [their] board [and] staff.” Although we commend CQAS for creating an anti-racism committee, we would like to remind them that those impacted have already identified ways for healing. To begin any process of accountability, there is always a need to listen directly to and hear what has been called for in ways of healing. We would also like to remind CQAS that by establishing an anti-racism committee that seeks to engage QTBIPOC community members, onboarding QTBIPOC Board members, and hiring a QTBIPOC staff member while retaining personnel who have been named as engaging in racial violence is itself an act of violence with the potential to reproduce significant harms.

The Gender and Sexuality Alliance also recognises the recent violence committed by the Queer Education Foundation. One of the co-founders of the organisation has been named and implicated as a social actor involved in committing racially violent acts against our QTBIPOC kin. In response to this naming, the organisation identified in an Instagram post that the implicated co-founder would not engage in any additional work educating individuals on Queer issues (including QTBIPOC issues) until the New Year, and only after the co-founder has completed a two-week thematically oriented book club on the subject of anti-racism. It is troubling to learn that someone who has been in leadership roles in the 2SLGBTQ+ community for the past ten years has never before engaged with conversations about how his whiteness and leadership could be rooted in White supremacy, and is only now deciding to do this. Even more troubling is that they believe that a two-week book club will rectify years of ingrained behaviour.

Along with other community organisations operating in Mohkinstsis, and on Niitsitapi land, we stand in solidarity with these QTBIPOC kin and state in unison that we demand more and better from Calgary Pride, CQAS, and the Queer Education Foundation for those that were harmed as a result of their actions. The Gender and Sexuality Alliance of the Graduate Students’ Association commits, alongside other organisations, to not working with or supporting CQAS, Calgary Pride, the Queer Education Foundation, and all implicated personnel, until they have addressed the recent claims made by BIMPOC community members. We encourage all other community organisations working with 2SLGBTQ+ communities and community members in Mohkinstsis to do the same.

Finally, we recognise that there are historical and ongoing acts of racial violence experienced by QTBIPOC kin with Calgary OutLink, Centre for Sexuality, and Skipping Stone. This recognition is a call to ensure that each and every one of us is holding ourselves accountable as community service providers, as distributors of vital resources and support services, to those in our communities who continue to be neglected because of acts of colonial violence and White supremacy.

As our kin at Queers on Campus note, although the organisations we have listed here have maintained a historically supportive role for many of us, there is a need to ensure that such organisations, and the resources they dispense and draw on, benefit all members of our community.