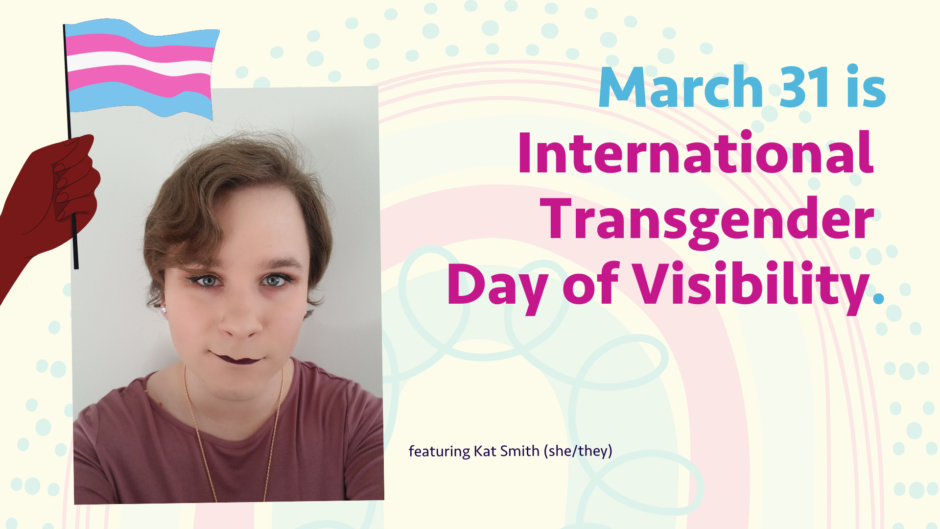 International Transgender Day of Visibility is observed on March 31 each year to celebrate transgender individuals and their contribution to society. This TDOV, we would like to feature Kat, a transfeminine graduate student alumni of UCalgary. Kat recently graduated from her master’s degree in Veterinary Medical Science. She worked with Dr. Dongyan Niu on an E. coli treatment project, and she recently graduated from the program.

As a trans person in academia, Kat’s experience overall has been positive, especially with other graduate students. Despite that, Kat felt that there is a gap in understanding and knowledge about the trans community on campus. There were a few instances that she felt she was maltreated by other people as a trans person, for example, being called by her birth name by a professor who had taught her for a semester.

When chatted about her pronouns, Kat shares, “It’s [My pronouns] really important to me, if you deny somebody their name, or their pronouns, it’s like you’re not talking to me, like I’m someone that you can interact with, but like an object.” Being understood on an individual basis is important to her, makes her feel included and seen as the person she is and not what was written on her birth certificate.

The conversations about and with the transgender community at UCalgary seem to also be lacking. Kat recalled there were only a few articles written about the trans community when she did a search in her UCalgary email. Kat expressed that the efforts need to be consistent and more educational about the trans community to show care and commitment to making improvements. Gender and identity workshops should be mandatory or highly encouraged at an environment like the University of Calgary.

Kat’s advice for when starting a conversation with a trans person: introduce yourself, your pronouns, tell them a little bit about yourself, be conscientious about what you are saying, and be respectful of others’ boundaries.

Thanks, Kat, for the great conversation!

The GSA Gender and Sexuality Alliance Subcommittee or GSA^2 is established to enhance the life and graduate school experience of 2SLGBTQIAP+ (Two-Spirit, lesbian, gay, bisexual, transgender, queer, questioning, intersex, agender, asexual, aromantic, pansexual, and all gender and sexually diverse identities) GSA members through events. The subcommittee works to increase the visibility of gender and sexual minorities within the university and broader community.

On March 30, GSA^2 will be hosting its panel event on the topic of Trans in Academia where three guest speakers will share their lived experiences as transgender people in academia and reflect on the issues of power imbalance, inclusion, and diversity. We welcome you to attend. Register here

About the Guest Speakers:

Xen Virtue (he/him/his): Xen Virtue is a queer, transgender MA student in English and Creative Writing at the University of Calgary who graduated with a Bachelor of Arts in Creative Writing from the University of British Columbia in 2017. He studies queer young adult literature and its representations of HIV/AIDS. His upcoming MA thesis is a YA novel about Gabe, a gay, transgender Albertan teen who finds out he is HIV+ while hunting down old family friends for a party honouring the thirtieth anniversary of his uncle’s death from AIDS. Virtue is passionate about making queer history accessible to queer youth and aims to use this project to articulate the silences and disavowals that still surround HIV/AIDS.

Victoria Bycholtz: Victoria Bucholtz holds a doctorate in History from the University of Calgary, with a cognate field in gender theory. Victoria is a LGBTQ+ facilitator and currently teaches at Mount Royal University. is a transgender rights activist, entertainment producer, and drag queen. An avid mountaineer, skier, and dog mom, she lives in Calgary, Alberta in the Treaty 7 Region