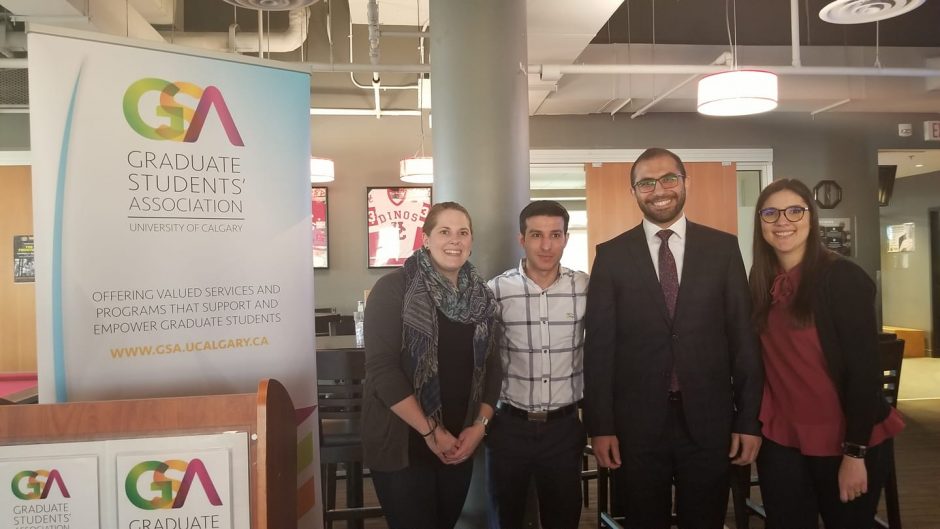 The Graduate Students’ Association (GSA) welcomes newly elected officials for the 2019 – 2020 academic year after our 2019 election held on March 11 and 12. A total of 7 percent of UCalgary graduate students voted at this election.
Two (2) Executive positions were acclaimed prior to the campaign period. The current Vice President Finance and Services, Mohammad Mansouri, captures the President position; and Marcela Lopes continues her Vice President External role for a second term.

When asked what he is most looking forward to in the upcoming year, Mohammad Mansouri, the President-elect, comments, “I am thrilled to start my new position in the GSA as a President. It will be a challenging year for me; however, I am sure that GSA will have great achievements at the end of the day because we have great support from our members and staff.”

Marcela Lopes, the Vice President External-elect, also shares that she is looking forward to strengthen and increase the GSA’s external advocacy strategy. “It has been an incredible year, and I hope to accomplish even more, especially in terms of federal advocacy,” she says.

Mina Iskander, this year’s VP Student Life, is elected as the Vice President Finance and Services. He is excited about the new position and shares that, “The GSA has been doing better over the years, I am honoured and excited to be the elected VP Finance and Services for this upcoming year. I think success is a lifetime journey and I will work hard to move the GSA a step forward on this amazing journey.”

The other two (2) Executive positions, Vice President Academic and Vice President Student Life, will be filled by a by-election hosted at the GSA Graduate Representative Council (GRC) meeting at the end of April 2019.

This year, the GSA also held the election for the Associate Vice President (AVP) Labour that chairs the GSA Labour Relations Committee. This committee is responsible for the labour relations administration of the GSA according to the GSA Bylaws. The AVP Labour position was captured by Brit Paris, current GSA President. The voter turnout for the AVP Labour election is 8 percent of the number of graduate students that were academically employed by the UCalgary over the past year.

“I’ve thoroughly enjoyed serving graduate students the last two years as GSA President and I’m very excited to put that knowledge and experience to use in this new role. I plan to focus on engaging academically employed graduate students to educate them about their rights and responsibilities to empower them to speak up against contract infractions,” Brit commented after the election results were announced.

The newly elected officials will be sworn into office at the April GRC meeting to start their new term. The GSA would like to thank all graduate students who voted at this election and our outgoing President, Brit Paris, and outgoing Vice President Academic, Elena Favaro for their dedication to graduate student community during their service term.